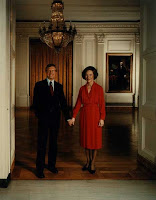 “Heads—or more to the point, faces—are especially unsettling. At the University of California, San Francisco, in whose medical school anatomy lab I would soon spend an afternoon, the head and hands are often left wrapped until their dissection comes up on the syllabus. ‘So it’s not so intense,’ one student would later tell me. ‘Because that’s what you see of a person.’”
--Mary Roach, Stiff: The Curious Lives of Human Cadavers
It is not a well-known fact that Ansel Adams was an accomplished portraitist. As with his landscapes, Adams was a meticulous and confrontational, staging his camera with a perspective that commanded attention. He was especially interested in the wartime Manzanar “internment” camp in California, where alongside Dorothea Lange he photographed Japanese-American internees in the 1940s. This series of portraits was eventually published as a photo essay under the name Born Free and Equal: The Story of Loyal Japanese-Americans, and it has been all but forgotten since then. Even most of Adams’ most ardent fans would be surprised to know that Adams was the first photographer ever to be commissioned to make an official portrait of an American president (Jimmy Carter).
In analyzing and comparing Adams’ landscape and portrait work, it is easy to discern his artist’s empathy and attraction towards the former, as opposed to his clinical and almost text-book analytical approach to the latter. People—it seems—were not nearly as compelling to him as the textures, values of light, shapes and geometry of pure nature. His portraits, although technically “successful,” lack the vitality of his landscapes; the people are oddly cropped, either shown far too up close, or rendered too far away to be interesting. It is, therefore, a lucky coincidence for us, that he found his true calling in the breathless vistas of the American landscape.
Other photographers have had a harder time distancing themselves from the romance of portraiture. Even distinguished photographers at the level of Adams, such as Edward Steichen and Alfred Stieglitz, failed to resist its siren call. Others, such as Richard Avedon, used its potential to reach stardom. Avedon’s photographs, devoid of any landscape detail, are hauntingly direct. His portraits are an assault of eyes and hands; stark stares beckon us from the flat medium of the photograph, hands curl, clasp, claw and dance in an ancient language. Avedon’s work mesmerizes, even if he himself was a prisoner of portraiture’s mystery. His work remained largely unchanged in approach throughout his career and has since his death has seen a marked decline in artistic value. An inflexible artist, his “approach” became his crutch, and his inability to suffer the tribulations of genre exploration hurt his fine-art legacy.
It is part of human nature to interact, to engage, to socialize. Photographic portraits create an unnatural barrier of engagement: there is an intimacy between viewer and subject, where the viewer devices a personality, a set of feelings and thoughts, and method of communication between themselves and the photograph. It is not about the work of art, per se, but rather about the hidden reality of the model. The eyes and hands tell a story coded by the photographer.
There are photographers who are brilliant in creating intimate storylines, of coaxing a relationship between the viewer and the photograph, and there are those who are more abstract in their approach. There are merits, after all, to the argument that landscape is in fact a form of portraiture, except lacking the anthropomorphic qualities that require emotional engagement from the viewer: namely, faces and hands. The portfolios of certain photographers even give us clues as to their personal feelings on people: Edward Weston made a career of depersonalizing women, to the extent of incorporating the human female form in his landscapes. To his credit, however, his abstraction in regards to portraiture was not limited to the opposite gender; some of his most clever work involves the truncated nude body of his son, sans the identifying features of hands and face.
Truncation of the human form has been around for thousands of years; art students today truncate nude models in a variety of art-forms to practice on the elemental ideals of beauty and aesthetic. Without the hands and faces, these forms lack identity and can be examined without emotion. Transmitting emotion through portraiture is a long and involved process, if it is to be executed successfully. As artists, we must primarily be interested in our subject matter (unlike Adams); second, we must be highly concerned by the ensuing connection between the portrait and the viewer, and understand its language in its entirety (and not lean on the artifice of celebrities as our models to create false intimacy, or on the simple mystery of direct contact, a la Avedon); and lastly, we should find ourselves open to explore other genre, and understand the simple human need to form a bond. Even in landscape we can find humanity if we search for it.
“Landscape photography,” once said Ansel Adams, “is the supreme test of the photographer—and often the supreme disappointment.” Without the language of eyes and hands, the landscape artist is reliant on form and interpretation, and it is here that the true genius arises. Not necessarily on basis of success, but of attempt to rise above adversity, and to continue the experiment until the artist is satisfied. It is the supreme form of artistic intimacy, where the coded message is not between the photograph and the audience, but rather between the photographer and his subject.
Posted by Katherine Agurcia at 5:30 PM No comments:

In Response to Place - A Few Thoughts