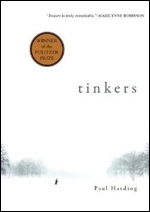 There are certain books, when read, that completely restore your faith in the idea that true talent really does exist.  Carefully honed, this talent can completely blow your mind.  "Tinkers," by Paul Harding, is just that kind of book.  Now, it's not like I'm discovering something completely unknown here; he did win the Pulitzer Prize for it.  I picked it up at DCA right before getting on a plane for a week's commission, and promptly forgot it.  I rediscovered it in my luggage when I returned home, but just the sight of the little gold sticker on the cover telling how good it was, that it had won a major award, made me suddenly tired.  Ugh, smart literature.  When your brain is fried after overstimulation at work, the last thing you need is writing that makes you think.  Sometimes it's all I can do to get through half of a People.

This past week, though, my body finally protested to all the shenanigans I make it endure, and promptly shut down on me with perhaps the worst flu I have had in recent memory (and if you know me, you know that I am pretty knowledgeable on the subject of bad flus).  Frustrated and stuck at home recuperating, I picked up the little book, and, let me tell you, half a day later I finished it in one sitting (one... laying down? I wasn't actually upright during any of this, my chest hurt too badly).  It was so good, I read it again the next day.

If you doubt my own opinion, here is a little snippet from the book:


"He crouched to look at a daffodil.  Its six-petaled corona was fully unfurled, like a bright miniature sun.  A bee crawled in its cup, massaging stigma and anther and style.  Howard leaned as closely as he dared (he imagined sniffing the poor bee into his nose, the subsequent sting, the unfortunate wound, the plucked and dead creature on its back in the flattened, cold grass) and inhaled again.  There was a faint sweetness mingled with the sharp mineral cold, which faded from detection when he inhaled more deeply in order to smell it better."


The language is just so beautiful here I don't even need to tell you what the book is about.  This is prose at its best.  Reading it reminded me strongly of a passage in Stephen King's book "On Writing," in which he quotes Amy Tan.  He asks her which question she never receives during book signing Q and As.  "They never ask about the language," she answers.

Language, the most important thing of all, I think, regardless of your genre in art.  If you cannot get your message across to your viewer, then you are lost.  The whole idea of art is communication.  Remember that, and read Paul Harding's book.  You will thank me.
Posted by Katherine Agurcia at 12:58 PM